Why DR Congo’s Expensive Potatoes are Coming to Rwanda 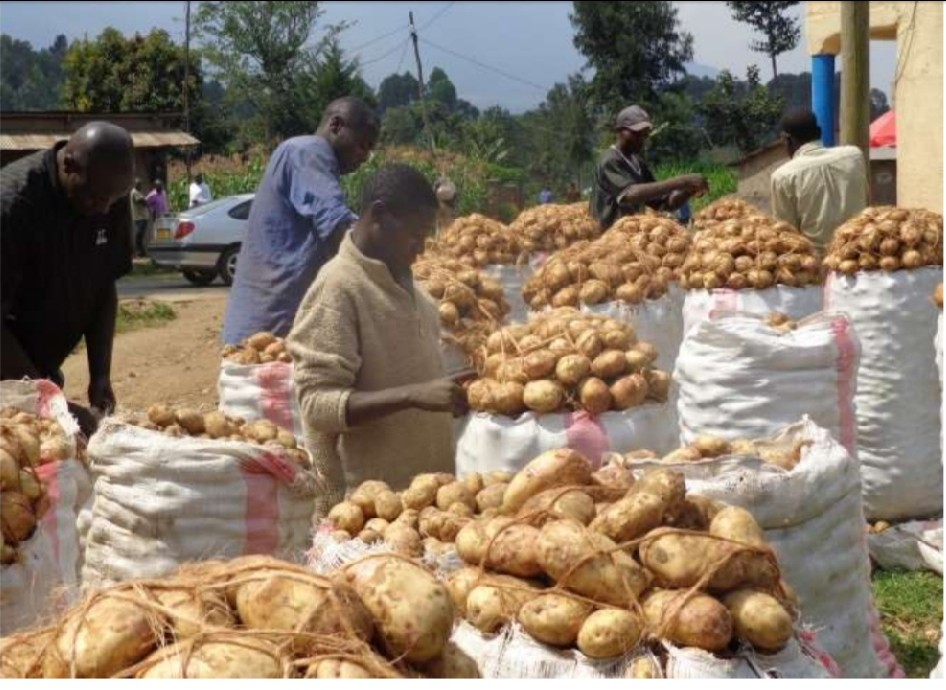 Why DR Congo’s Expensive Potatoes are Coming to Rwanda

Have you noticed that from July to October, an annual phenomenon happens whereby prices of potatoes, a common delicacy, start to increase significantly in Rwanda.

The situation usually becomes so serious, it dominates local news headlines for weeks. After that period, potatoe prices again come down on the market.

The cause of the fluctuations in prices is as a result of a severe shortage of potatoes in Rwanda, which has to depend on tons imported from eastern DR Congo, according to data collected by The Chronicles from months of investigations.

It is the first time the public will know that Rwanda actually gets some of its potatoes from elsewhere. It will shock many to learn those potatoes are actually coming from Congo.

In December 2017, prices of potatoes had become worryingly high that Agriculture and Animal Resources Minister Dr. Mukeshimana Gerardine together with Local Government and Trade ministry counterparts at the time, camped in northern Rwanda.

The vast percentage of potatoes produced in Rwanda, are grown in Rutsiro, Burera, Musanze, Nyabihu, and some parts of Rubavu districts. Truckloads of potatoes roll from that region to supply Kigali and all other regions.

Together, these north and north-western Rwanda districts grow more than 95% of the 1.3million tons of potatoes the whole country produces annually. It has earned the region, the “bread-basket” tag.

There is a major crisps producer Winnaz, set up as a joint venture between a Rwandan and Dutch potato company. Winnaz’ different crisp types are what dominates shop and supermarket shelves across Rwanda.

Potatoes are such a powerful industry that the northern part of Rwanda counts some of the richest Rwandans. Nearly every rural family is involved in the production and sale of potatoes. As a result, the sector has seen mafia-like tactics slowly infiltrating the sector.

At the time in 2017, it emerged that farmers down in the villagers were literally being ripped off by being paid horribly low prices. It also emerged that unscrupulous businesspeople were paying farmers as low as Rwf 100 and much less for a kilo of potatoes, and then hoarding the potatoes, to be sold later in places like Kigali for as high as Rwf 300 or more.

When it became apparent the potatoes were worthless, the farmers had started keeping them in their homes, preferring the potatoes to rot, than sell them at what seemed like throw away prices.

Minister Mukeshimana and her colleagues held meeting with over 500 big potato cooperatives. From the meeting, it was resolved that a strict control system would be put in place, overseen by the local government ministry, to enforce a minimum price of between Rwf 165-170 per kilo at the farm. The rate at which the cooperatives were to sell at the market to whole sellers, was also set.

Since then, government has been regulating prices of potatoes, like it does with many other food items. Otherwise, if the sector was to be left alone, a price for a kilo of potatoes could as well rise beyond the reach of many.

In August 2018, the Trade and Industry Ministry announced that potatoes in Kigali shouldn’t surpass Rwf 265 per kilo. Government had intervened to control prices that were going up uncontrollably. However, by October that year, a kilo in Kigali was selling for between Rwf 400-600, depending in where you shopped.

There are different types of potatoes; more than 18 of them. Last year in March, another five new varieties were introduced by local scientists under the auspices of the Rwanda Agriculture and Animal Resources Development Board (RAB).

The potatoes varieties have differing tastes. Some being small with slightly yellowish color and are said to be the preferred quality for fries (amafiriti).

Then there are those with relatively big size, looking more like they contain alot of water. These are better when boiled, sometimes mixed with beans. It is a delicacy called ‘Imvange’ or mix.

Overall, among the potato varieties, the six – Kruza, Gahinga, Gasore, Gikungu, Kigega and Kinigi – are the biggest source of crop supplies in the country.

Last year, like the previous years, around same period when prices go up, it also happened.

In September this year, the Trade and Industry Minister Soraya Hakuziyaremye issued a nationwide directive that a kilo of potatoes shouldn’t surpass Rwf 400. It followed public outcry over exploding prices of such a staple food which had gone beyond Rwf 600.

Now, The Chronicles, can exclusively report details as to why prices of potatoes go up between July to October. By end of June, supply of potatoes in Rwanda begins to dwindle so much that what is available on the market cannot satisfy demand.

We have established that a huge potatoes business has been happening between Masisi region of eastern DR Congo, and Rwanda. Businesspeople involved in the transportation of potatoes have cooperatives.

One such cooperative is ‘Bas peuplé coopérative’, dealing with potato import business. For the months of August, September and October, this cooperative brings in over 40 tons of potatoes EVERY DAY.

Those potatoes from Masisi are transported directly to Kigali. The problem, however, a 100kg sack costs $55 (Rwf 53,000) in Masisi.

A Fuso truck carrying 10 tons of Congolese potatoes pays Rwf 400,000 as tax to Rwandan authorities. More than 50 tons are said to cross daily during that period of the year when potatoes are coming from Masisi.

The result is that the final retailers in Kigali markets have to sell those Congo potatoes at a relatively high price, to be able to make a profit – to stay in business anyway.

Thiery Mayala Nzanzu, head of the ‘Bas peuplé coopérative’, told us: “Even though the potatoes from Congo are expensive, Rwandans like them so much because of the way in which they are cultivated. They are exposed to low amounts of chemical fertilizers. They are very tasty.”

He said the quantity of potatoes brought in this year increased so much compared to previously.

Profits in Goma and Bukavu

When it reaches the end of October, production of potatoes in Rwanda would usually have gotten back to normal. Rwandan farmers would be harvesting tons, and get back into controlling the market again after that short absence.

At the same time, however, as production improves in Rwanda, according to Mayala Nzanzu, due to heavy rain, roads in Masisi become impassable. The transporters of Congolese potatoes stop their trade.

Another phenomenon emerges once the Congo trade comes to a halt. Rwanda, now turns into the provider of potatoes for Goma’s 1.5million population, and down south to Bukavu.

Rwandan businessman Pierre Celestin Bimemyimana, is one of those making a fortune from exporting potatoes to Goma and Bukavu.

Bimenyimana also confirmed that the reason Congolese potatoes come is because between July to October, production of potatoes in Rwanda would have been very low. He added that as some Rwandans enjoy the small Congolese potatoes which develop with low chemical fertilizers, the Congolese in Goma and Bukavu prefer the big-sided potatoes from Rwanda.

Another element to this potatoes equation, is, when production begins to increase, a 100kg sack of Rwandan potatoes goes for Rwf 33,000. It is a very low price, according to traders we interviewed, which makes good business to export Rwandan potatoes to Goma and Bukavu.

Bimenyimana explained: “When Congolese potatoes come to Rwanda, they sell at high price since there will usually be low supply from Rwandan farmers during that low season. On the other hand, our potatoes are cheap in Goma because our farmers would have produced large quantities.”

Every single day, during the high production season in Rwanda, more than 50 tons cross into Goma.

In other words, when our farmers in Rwanda are not producing enough, we pay high prices for Congolese potatoes. And, when there is so much production, businesspeople take them to Goma and Bukavu to make a kill for profit. It is very clear, these two phenomenon help keep a high price for potatoes in Rwanda throughout the year, which slowly keeps increasing.

Rwandan potatoes are selling too low because farmers don’t have post-harvest facilities. A government assessment prepared in August last year by RAB’s Roots and Tubers Research and Technology Transfer Programme, Dr. Rukundo Placide, said there was high yield loss of potatoes due to shortage of appropriate and affordable post harvest handling technologies.

Cassien Karangwa, Director of Domestic Trade at the Trade and Industry Ministry, also confirmed on September 14 that during season C, which runs from July to September, farmers are not growing potatoes. As a result, there is very low or nearly no supply which leads to increasing prices.

During those months, farmers will instead be preparing ground for planting Season A that runs up to February the following year. As a consequence, Season A, and Season B from March to June, usually have plenty of potatoes.

During those months when farmers are not growing potatoes, some will usually be engaged in growing vegetables.

To say it plainly; since there is no way of storing the massive quantities of potatoes produced by farmers, they have to make sure all of it is sold, otherwise it will rot.

This means that the seasonal shock prices will continue to appear in the months July to November. Also, there will continue to be an upwards trend for potato prices, with a slight but steady annual increase. 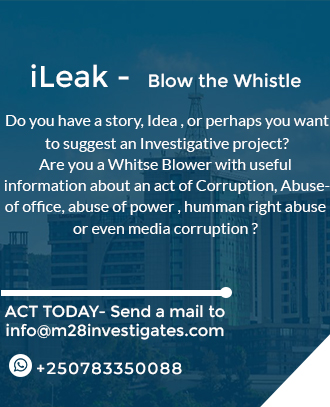